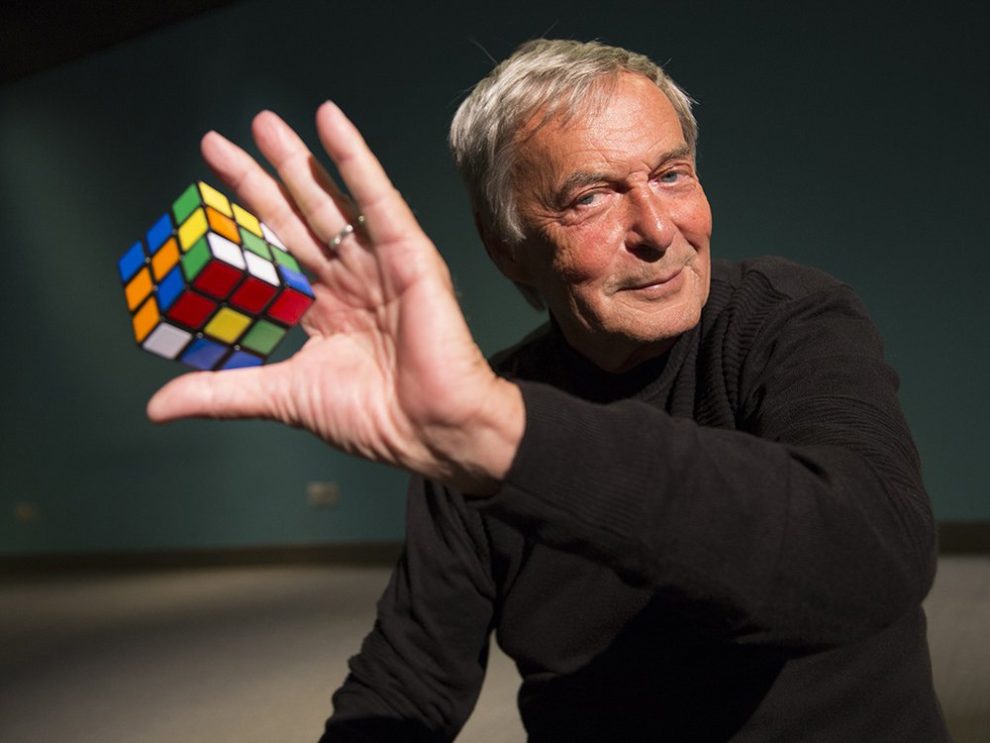 Forty-five years ago, on October 28, 1976, the patent for Erno Rubik’s magic cube was registered. Erno Rubik Jr. taught architecture at the Budapest College of Applied Arts in the 1970s. Even in 1974, he wondered how to make the curriculum more understandable and interesting. To illustrate the spatial movements, he made a structure of pieces of wood held together by rubber bands. The sides of a cube containing nine squares in a 3×3 layout per side were different in color and could be rotated around three axes. He glued colored sheets of paper to the edges of the big cube so he could keep track of which little cube would go where it was rotated.

The students really liked the cube, and he realized that the simple, easy-to-manufacture structure could pique the interest of a wider audience. As Erno Rubik Sr., who designed aircraft, among other things, filed several patents, the procedure was not unknown to his son either. He filed his designs for the magic cube with the Patent Office in 1975 and was granted patent protection on October 28, 1976 under the name RU-158, a “spatial logic game”.

Rubik tried to find a manufacturer in Hungary, but within the framework of the planned economy it did not go easily. The toy, marketed under the name of the Magic Cube, has been in short supply since 1977, and by 1980 almost 1 million pieces had been sold in Hungary. In 1979, Rubik licensed distribution to American company Ideal Toys. More than 350 million units of the Magic Cube have been sold to date. (The number of counterfeits cannot even be estimated.)

The dice also won awards in 1980 in several countries – Germany, France and England. In 1981, the Museum of Modern Art in New York added the cube to its collection of architecture and design. In 1981, the English band The Barron Knigts “Radio Mr. Rubik ”was broadcast. Since then, the cube has appeared in the clips of countless performers (Genesis, Jennifer Lopez, Spice Girls, Taylor Swift, etc.), and the recurring theme of the films Until Korea, it also had an extremely fertile effect on architecture.

At the same time as the dice spread, the puzzle competitions started. First national and then European championships, later world championships were held twice in Budapest, in 1982 and 2007. The now just a few seconds of unloading peaks are tilted one by one, and in 2021, the Dutchman Mats Valk set the latest record with 4.74 seconds. You can also compete with your eyes blindfolded, half-handed, half-legged, and under one breath.

An exhibition entitled “Beyond Rubik’s Cube” opened in Jersey City, USA, to mark the fortieth anniversary of the creation of the magic cube. Erno Rubik has received numerous awards, but in his justification there are the dice: Gabor Denes Award (1995), Jedlik Anyos Award (1996), Kossuth Award (2007), Hungarian Heritage Award (2009), The Middle Cross of the Order of Merit of the Republic of Hungary with a Star (2010), Prima Primissima Award (2010), Homeland Award (2012), Honorary Citizen of Budapest (2014), Order of St. Stephen of Hungary (2014), Artist of the Nation (2014).