Home » Entertainment » Revenge of a gunslinger – do you love westerns? You better avoid this movie with a wide berth 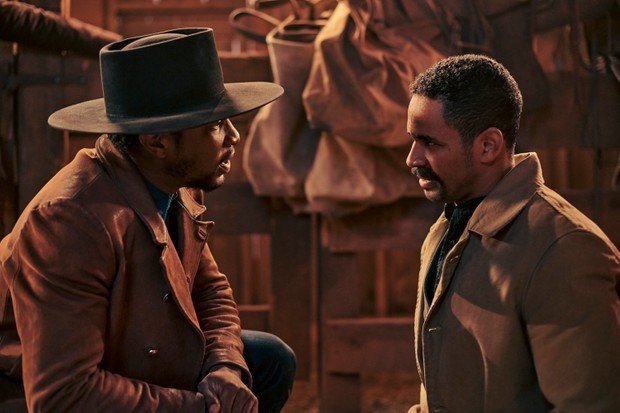 Westerns is a classic film genre that has been popular for years. Heroic cowboys, beautiful women, bad bandits, and even worse Indians – this is usually a guarantee of success. But when the Netflix platform takes on this genre, anything can happen. Revenge of a gunslinger – do you love westerns.

I am always attentive to information about new movies and series on streaming platforms. Recently, thanks to our series “What’s new on Netflix”?. I learned that a new western called Revenge of the Gunslinger will appear on this site. As a little boy, every Sunday with my grandfather. I watched all the possible westerns that Television usually served us at noon.

I am a huge fan of this kind of movie. So I waited with joy for the premiere of Revenge of the Gunslinger. Although a certain dose of anxiety was also there somewhere in my spirit. What can I say, I was quite concerned seeing that the entire cast in the west would be black. And no, I do not mind such a procedure. But remembering the realities of the Wild West and the already cult Django. It is hard to imagine in those times an entire city composed only of people with this skin color.

I Am The Outlaw!

The first 10 minutes of the film give us great hope that Gunslinger’s Revenge can be a pretty good production. We see a mysterious cowboy who enters the pastor’s house, kills him and his wife, and their little child (a boy about 10) cuts a cross on the forehead with a knife. A scene worthy of Tarantino itself – so it may seem that this is how it will continue. Another scene – this is our main character – the famous Nat Love (he is the kid with the cross cut out on his forehead) in the church shoots the priest, the former bandit. All in all, it is still good. But we ask ourselves – what did this priest do?. Although the main character mentions the wrongs of the past. We, as viewers, do not get an explanation. Apparently, the director decided that we had to figure it out for ourselves.

As for the director himself, he has one film behind him, which is quite average. This production was released in 2013 and it is, of course. A western about black people. The average rating for the previous production of Jaymes Samuel. Who is also a screenwriter, is 3/10. I seriously wonder what was driving Netflix executives to hire this man. It’s like hiring an alcoholic to run a liquor store. Indeed, the qualification is excellent!

Returning, however, to the plot of Revenge of the Gunslinger – well, the main axis of the film is, of course. Nat Love’s desire to take revenge on the man who killed his family. It turns out that the boss of a bloodthirsty gang is behind this – the famous Rufus Buck, also known as the devil. So Nat Love gathers her people – including Stagecoach Mary. And together with Sheriff Bass Reaves, they set off to find Rufus. In a word, we have famous historical figures here. We also have a plot as simple as building a flail – how did you manage to spoil it?. And what didn’t play there? Well, totally everything!

The director decided to present to us his vision of the Wild West without actually explaining anything. It often seems that this is a pastiche and not a serious story from real people. For example, Buck’s bandits have gathered to create “The Promised Land” in the all-black city of Redwood City. The city of Samuel is painted in rich shades: vivid pink, juicy red, and green. The saloon is reminiscent of a jazz club from the 1920s, with colored lights, leather-lined walls. And almost nude dancers painted in blue. And it’s all in the Wild West!

Moreover, everything is also owned by black people – from homes and businesses to the government. The director does not explain why this city is the promised land. Apart from an alleged lack of white inhabitants.

Must Read: Augmented Reality – a cocktail of real with virtual

Well, it would be an explanation if we knew that the community, for example, were slaves. After receiving freedom, together with a charismatic leader created their city. But not only is nobody explaining it to us but Rufus, who talks about a utopian vision of the city. And on a good day beating the former mayor and murdering one resident who does not want to pay taxes, is simply not credible. Well, finally, how – is it a land promised for black people or a settlement terrorized by a psychopathic gang?

Besides, the aesthetics in Gunslinger’s Revenge looks artificial. Redwood City is too clean, without a bit of dust or mud. The clothes of the main characters, despite the fact that they travel through the Wild West, look straight from the store. And the best for last – our heroes find themselves in the white city which is painted all white and only white people live there. Funny isn’t it? The city of white people in every building white – funny?. I do not think so.

Acting in Revenge of the Gunslinger, despite the great cast, is also not outstanding. Idris Elba, who played Buck, was supposed to be a “devil” and a psychopathic gang boss. Interestingly, most of his game looks like someone told him “look scary, that’s enough.” In fact, throughout the movie. Buck will kill maybe two people. And in the scene where his supporters free him from the transport of prisoners, killing all the (white, of course) soldiers. He just goes in slow motion. And that’s all.

The only role in the movie that deserves more attention is Delroy Lindo, who plays Sheriff. His character is charismatic and really well portrayed. As for the rest of the cast. It looks like the director literally gave them one sentence at a time. “You’re the fastest revolver so keep playing with guns”. “You’re a woman dressed as a guy so you have to be aggressive and hitmen,” etc. These are not the heroes of flesh and blood. And schematic characters without any depth.

To make matters worse. The film is well-known – 120 minutes of screening and maybe 3 action scenes. OK, if there is action, the blood is flowing profusely. The heavy use of freeze frames during brutal scenes makes us guess that the director wanted to give us a Tarantino movie. But, unfortunately, it’s far from Quentin’s art! In addition. We were supposed to get a western that keeps us in suspense. And when during the final fight the famous “devil” stands in the window with a bad face and some hip hop is playing in the background. Excuse me, but it cannot be taken seriously.