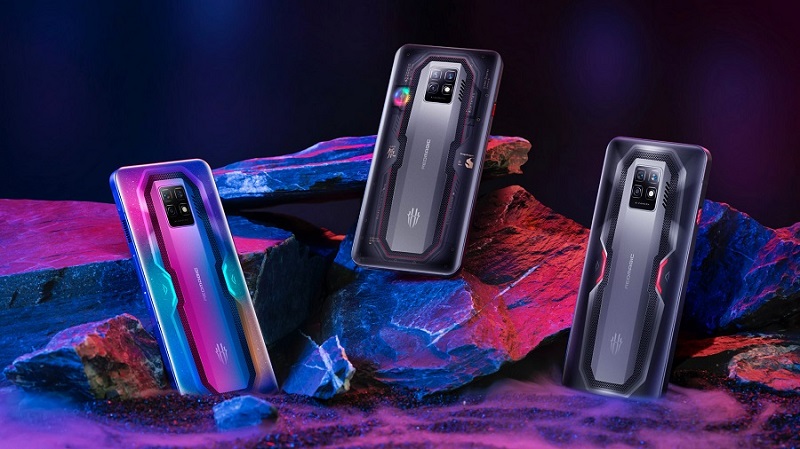 New smartphones from the Nubia gaming line have debuted – i.e. RedMagic 7 and RedMagic 7 Pro. The devices raise the bar even for the best flagships, entering with huge memory resources, very fast loading and a sub-screen camera in the Pro model.

Nubia, a brand owned by ZTE, today presented two new models for players – RedMagic 7 and RedMagic 7 Pro – which, however, should also be of interest to seekers of very efficient and original smartphones. Their technical specifications are quite similar, but of course the Pro model is more equipped.

As befits gaming models, RedMagic 7 / Pro smartphones attract attention with cases in interesting colors: Black Night, Cyber ​​Neon and Night Knight with LED backlight. The most original is the transparent version of the Deuterium Transparent Edition, which allows you to see what one of the design elements looks like – a LED-lit fan, which is part of the improved cooling system.

The pinwheel reaches up to 20,000 revolutions per minute, has an energy-saving brushless motor, and its volume is only 28 decibels. This element allows you to lower the processor temperature by as much as 16 degrees. The ICE 8.0 cooling system also consists of profiled air ducts, a nine-layer structure with a total area of ​​41 279 mm², a large steam chamber of 4124 mm² and an opening flap on the back of the casing for better ventilation. You can also buy an external Turbo Cooler accessory with an additional fan.

There are also gaming buttons (triggers) with a sensitivity of 500 Hz and a touch response of 7.4 ms on the housing. Inside the phones there is of course the Snapdragon 8 Gen 1 chipset, supported by up to 16 GB of RAM in the LPDDR5 model and as much as 18 GB of RAM in the Pro variant. UFS 3.1 internal memory is also quite large – up to 512 GB, the top version of the Pro model has as much as 1 TB for applications and games. Nubia also used a separate Red Core 1 gaming chip, which went to the Pro model.

Under the display glass of the RedMagic 7 Pro model there is a 16 Mpix sub-screen selfie camera, thanks to which there is no cutout there. The basic model already has a traditional 8 Mpix camera placed on a frame above the screen. Both phones also have a fairly standard set of 64 Mpix + 8 Mpix + 2 Mpix matrices.

RedMagic 7 phones are also distinguished by very fast charging. The basic model has a 4500 mAh battery powered by 120 W, while in the Pro model a 5000 mAh battery can be charged with a power of 135 W. Reaching 100% of the battery takes only 15 minutes. The set of both models includes 165 W GaN chargers.

The cheapest variant of the RedMagic 7 model is available in China for 3,999 yuan, the most expensive – means the cost of 5,499 yuan. Prices for RedMagic 7 Pro start from 4799 yuan, and the top model with a transparent housing and 1 TB of memory costs 7499 yuan,

RedMagic 7 and RedMagic 7 Pro smartphones should also hit Europe – the manufacturer has already announced the upcoming global premiere of these phones.

Click here to post a comment
Oppo will finally show the tablet. There will also be headphones and a watch
OnePlus Nord CE 2 5G goes on sale. Will it demolish the middle shelf?
Comment