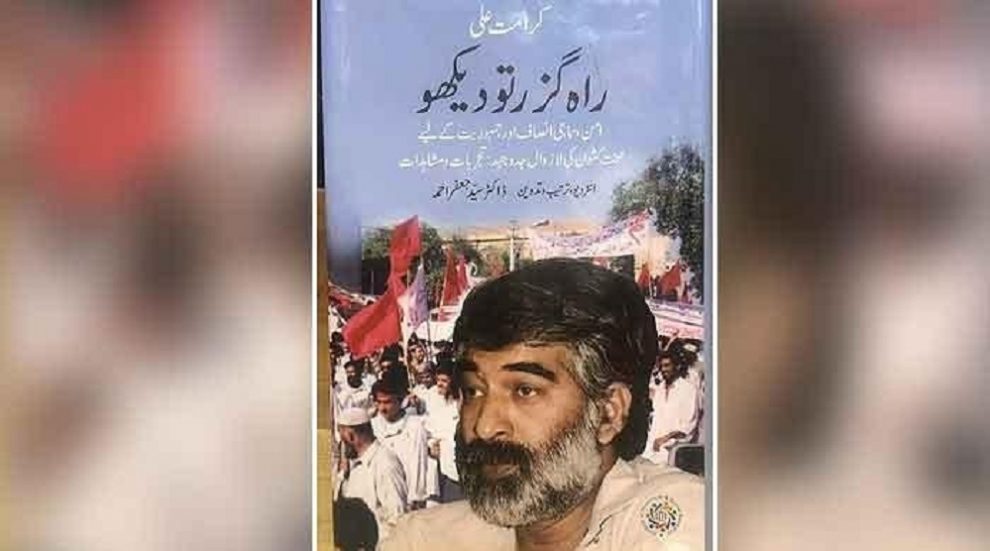 A book titled, Raahguzar To Dekho, has recently been published to acknowledge over-five-decade-long struggle of Karamat Ali, noted labour rights leader and the Pakistan Institute of Labour Education and Research (Piler) executive director, in the fields of trade unions, left politics and democratic movements in the country.

Compiled and edited by Dr Syed Jaffer Ahmed, former director of the University of Karachi’s Pakistan Study Centre, the book has been published by the Institute of Historical and Social Research (IHSR). It is based on detailed interviews of Ali conducted by Dr Ahmed.

The book is an interesting narration of Ali’s experiences in various student, labour, left and peace movements during the past 50 years.

In the preface, Dr Ahmed, who is currently serving as the IHSR director, writes that the purpose of the book is to preserve the personal knowledge of Ali regarding historical accounts during the past six decades in Pakistani politics, particularly labour movements, through interviews.

Belonging to a working-class family, Ali was born in Multan, two years before the Partition. His father worked as a department worker.

Ali himself worked in a factory and attended the Government Emerson College in Multan in 1962.

According to the book, at that time, a group of 12 activists belonging to the National Students Federation (NSF), who were expelled from Karachi by then Ayub Khan’s regime because of their political activities, visited Multan. They included Ali Mukhtar Rizvi, Mairaj Muhammad Khan, Fatehyab Ali Khan, Nafees Siddiqui, Baqir Askari, Johar Hussain and others. “We arranged a sit-in in Multan to demand of the authorities that the NSF leaders be allowed to remain there.”

In 1963, Ali moved to Karachi to live with his eldest sister and from here, his journey for labour rights started. He joined a factory in the Shershah area and also took admission to the SM Science College.

“The 1963 workers’ movement was the first powerful movement in Karachi. I did not attend the rally that started from Barha Board to Shershah but I became familiar with the unions of workers. Our factory was also closed due to the protest,” he said.

Must Read: Pakistan reported 1,123 coronavirus cases in one day

Because of his familiarisation with NSF leaders in Multan, Ali joined the left-leaning student group and started taking part in the anti-Ayub Khan movement in the late 1960s. “When Ayub Khan kicked out Zulfikar Ali Bhutto from the position of foreign minister, we invited him at a gathering near Gurumandir where he mobilised the students.”

Ali said that a group of NSF led by Mairaj Muhammad Khan joined Bhutto’s newly formed party but another group led by Rasheed Hasan Khan, which included him, was against the decision of joining the Pakistan

“During that time, Maulana Abdul Hameed Bashani, a leader of the National Awami Party, inspired us and we took part in political activities and agitation during the period from October 1968 to March 1969.”

In 1969, Ali joined the Muttahida Labour Federation, a trade union group that was formed because of mobilisation of Karachi’s veteran labour leaders Usman Baloch and Shah Raza Khan.

The book discusses in detail the weakening of the labour movement in Karachi. Ali said the Bhutto government imprisoned a large number of people during the 1972 labour movement.

Only a few months had passed since the installation of Bhutto’s government when protests erupted in the SITE area on June 7. By the second day of the protests, nine workers had lost their lives. It started off with workers of the Feroz Textile Mills protesting outside the mill over non-payment of salary and

“After the incident, factory owners and labour departments also used to circulate photos of active trade union activists. Also, the textile crisis had affected the textile sector where the workers’ mobilisation was high. After it, the oil crisis caused the closure of several industries,” he said.

“Because of it, until early 1975, most of the active trade unionists, who were mainly from Swat valley, left for their hometowns and went to the gulf

Ali also described the role of workers’ settlements (called Chalis) established in Karachi in the 1960s and 1970s, and the patterns of Pashtun migrant labourers, explaining their social network (dera system), and political mobilisation among them.

One of the chapters of the book describes Ali’s involvement in left-leaning politics and what happened after the ban on the National Awami Party followed with the formation of the National Democratic Party (NDP), the Awami National Party and the Pakistan National Party (PNP).

Ali has also analysed the gaps created between Baloch and Pashtun nationalist leadership and the division of the Pakistani left into pro-Soviet and pro-China (Maoist) factions.

Due to Sherbaz Mazari’s inclination to right-wing politics and Wali Khan’s insistence on reactionary politics, most of the like-minded people decided not to join the NDP and instead joined the PNP formed by Mir Ghaus Bakhsh Bizenjo, he said.

Ali has also described how Piler was formed and its contribution to the labour movement in the country. Reuters