Home » Education » First day in kindergarten – how to help a child? Advice for parents 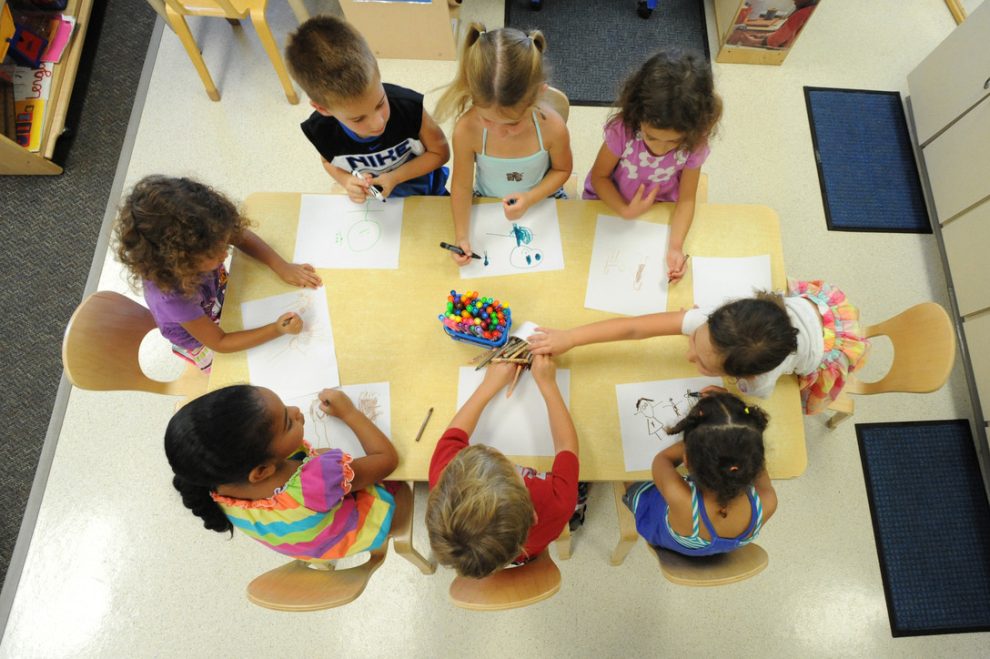 The first day in kindergarten is a great event both from the perspective of the child and his parents. A toddler is usually accompanied by huge emotions – most often tears caused by the separation of the caregivers. For this reason, it is so important to properly prepare him for this stressful moment. Read our article and check how to survive the first days in kindergarten.

First day in kindergarten: advice for parents of toddlers

September, and with it, the first day of school and kindergarten, is fast approaching. The beginning of fall is undoubtedly a stressful time for both children and their parents. For this reason, it is extremely important to properly prepare for this moment, even before the toddler enters the room. Here is our advice for parents whose children are waiting for a preschool debut.

Interview a few days before the debut

Even if the toddler has adaptation days behind him and he knows more or less what to expect in kindergarten, it will be extremely valuable for him to talk to his parents. The child should be told that a kindergarten is a friendly place where they can play with their peers. A therapeutic fairy tale for the first days in kindergarten can also be helpful. It will be much easier for a child to identify with a literary hero who – like him – has to face a new situation.

Wake up before the first day of kindergarten – what should it look like?

In the morning before the child is taken to kindergarten, it is a good idea to get up early so that you have time for some quiet preparations. Rush is not conducive to a good mood, and the parents’ nervousness will certainly spread to a stressed-out toddler. It is better to prepare a backpack and comfortable clothes in the evening.

Many parents wonder which of them should bring their child to the facility. It is best if it is a more determined and composed person. A child’s first day in kindergarten is often very emotional for both parties. If a few-year-old sees hesitation or tears in his parent’s eyes, he will be alarmed. Therefore, an affectionate but relatively short farewell is crucial, as well as being adamant to the toddler’s requests to return home. Importantly, this child should be handed over to the tutor, never the other way around. The situation in which the teacher picks up the toddler from the parents’ hands may be treated by him as a threat and disturb his sense of security.

Collecting a child from kindergarten – what next?

The toddler should inform about when he will pick up by the parent from kindergarten. For this purpose, it is best to specify a specific activity rather than an hour, such as “I’ll come for you after lunch” instead of “I’ll come for you at 1 pm.” However, it is worth remembering that such promises take by children very literally. If the parent does not show up at the appointed time, the toddler may become hysterical. For this reason, it is important to make sure at what times the dinner serve and arrive in advance. The first days in kindergarten for a 3-year-old should not last longer than 3-4 hours. The time may extend gradually later as the child gets used to the new situation.

Must Read: External parts of the computer and its characteristics

How to spend time together after kindergarten?

A preschool debut for a young child is a great occasion to celebrate. It is worth celebrating this special moment with a bicycle trip, ice cream, or fun in the park. However, it should remember that the first days of a child in kindergarten are associated with great emotions and a lot of impressions. Therefore, the parent should not surprised if the toddler does not want to do additional activities. It is perfectly normal to feel sleepy, to give casual answers to questions, and to want to be home as soon as possible. In this case, it is worth postponing the celebration for another day, and praising the debutant and assuring him of his great pride.

Home time after the first day of kindergarten

The adaptation period is extremely difficult for a toddler. The stress of going to kindergarten and separating from your parents can respond in many different ways. For this reason, difficult behaviors may arise. Parents of pre-school debutants should therefore be patient and approach children with a great deal of understanding. It is not about blindly accepting all your child’s anger and rude behavior, but about communicating with them calmly. After an adaptation period, when your little one accepts this huge change in life, their behavior should improve.

The first days of a child in kindergarten: adaptation classes

A few weeks before the start of the school year, many institutions organize adaptation classes. This is a great opportunity for a toddler, in the company of a loved one, to get to know the infrastructure of the kindergarten, the tutor, the schedule of meals and activities, as well as other children. Depending on the institution, they may take place every day for a week and then a single meeting lasts about an hour or is organized once every few days – then the child and the parent stay in the kindergarten for up to 3 hours.

Adaptation classes mainly involve visiting the facility and getting to know the surroundings. The toddler has a chance to see the yard with a garden and a playground, a cloakroom, toilets, a canteen, and the main classroom. The future preschooler also gets to know the tutor and new friends. On this day, integration games organize, e.g. art, movement, or music games. Initially, parents or guardians may take part in them – in such a case, we are talking about full adaptation. At a later stage, the toddler stays in the room only with other children and tutors, and his parents – in a different place on the premises of the facility. This call combined adaptation.

The first adaptive kindergarten classes are usually held during the summer holidays. They can also run throughout September. It all depends on the schedule of a specific facility, which can check on its website.

Adaptation days – why is it worth participating in them?

The adaptation period is extremely important for a preschool child. Adaptation classes are to make the first day in kindergarten easier for him. For this reason, consciously resigning from their participation can be a big detriment to both the toddler and his parents. If the child remembers the facility as a safe and friendly place, she is more likely to return to it in September. Adaptation days are to reduce anxiety and emotional tension associated with the need to part with their parents, as well as help young children master self-service activities, build self-esteem and a positive self-image, develop social skills, and understand and apply the rules of living in a group.

The first day in kindergarten – what to take with you?

A toddler who is waiting for a preschool debut should have a backpack or a sack with the necessary things. Talking about:

Hygienic articles (hygienic and wet wipes, a small towel, toothpaste and toothbrush, and a plastic cup),

A favorite mascot, which will cheer the child up and make it easier to get used to the new situation (as long as the facility allows children to bring toys).

The layette for school and kindergarten also includes art and stationery. However, the child does not have to have them for the first days in kindergarten. Parents will inform in advance, e.g. by e-mail, about the necessity to bring paints, a sheet of colored paper, or tissue paper.