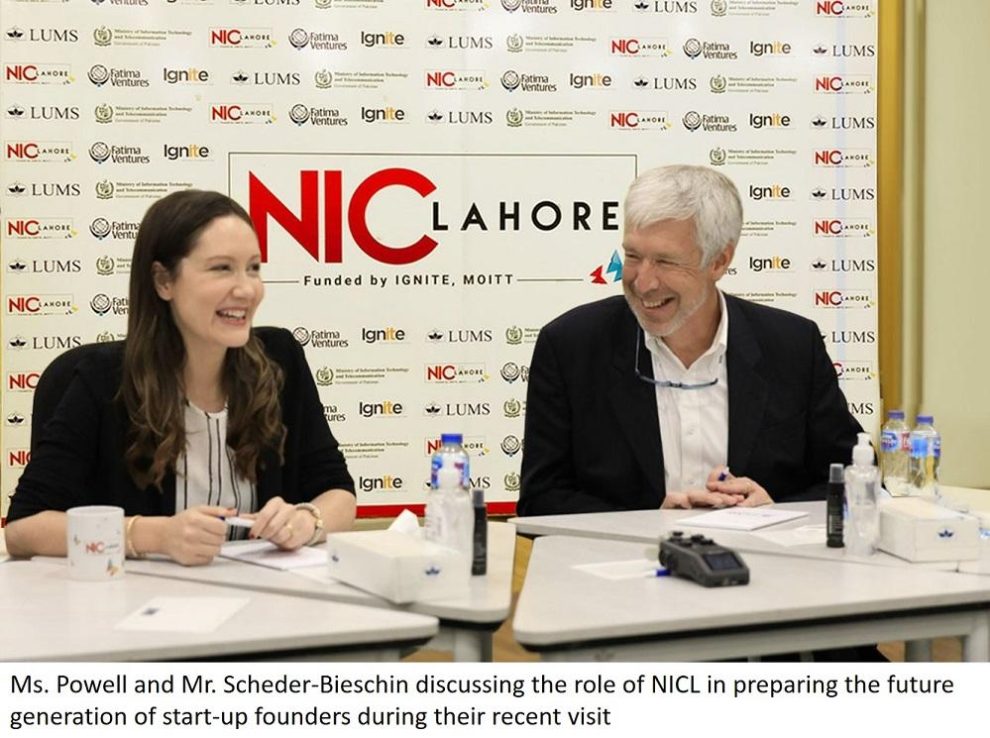 “Technological leapfrogging, be it through new venture creation or innovation of the industry.  The only way to attain the kind of economic growth needed to satiate the influx of our youthful population,” Chairman NICL, Saleem Ahmad. COO of 500 Global appreciates Pakistani start-ups during their visit to NICL at LUMS.
Lahore, November 13, 2021: Pakistani technology start-ups took the spotlight as Courtney Powell, Chief Operating Officer, and Managing Partner, 500 Global. USD 1.8 billion international venture capital firm, visited the National Incubation Centre Lahore (NICL) at LUMS. The visit was facilitated by Pak launch. Ms. Powell was accompanied by Board Member, Max Scheder-Bieschin, and hosted by Chairman NICL, Saleem Ahmad. The team was welcomed by the LUMS leadership including Rector, Shahid Hussain; Vice-Chancellor, Dr. Arshad Ahmad, and members of the Board Trustees.

During the day-long engagement, Ms. Powell and Mr. Scheder-Bieschin discussed the role of NICL in preparing the future generation of start-up founders. Mr Ahmad presented NICL’s vision for venture incubation in high-impact sectors. Its rigorous focus on skills development, and its role as an innovation hub for the industry. Citing the example of electric mobility work that fits well with the organization’s cleantech initiative. The visit coincided with the launch of the USAID-sponsored electric vehicle market assessment report, chaired by the US Consul General, William Makaneole at NICL.
The Facebook Innovation Lab, where virtual and augmented reality solutions come to life, and a co-working space, featuring a plug-and-play set-up. They exchanged insights with entrepreneurs from NICL’s graduated start-ups as well. Those currently in incubation and participated in a roundtable discussion with the Foundation Council members including Qasif Shahid (Finja), Usman Javaid (Ricult), and Ahmed Hussain (SSC).

Must Read: realme is Bringing its Biggest 11.11 Celebration on Daraz with up to 50% Discounts

“We’re truly impressed with the passion and potential we have seen so far,” said Ms. Powell of her visit. “At 500 Global, we believe that there is talent everywhere and fantastic founders in every market, and it’s just access to education capital and network that is needed to see their companies succeed. We’re excited to be on the ground here to learn and formulate what our dedicated Pakistan strategy should be.”
Speaking on Pakistan’s emergent start-up landscape, Mr. Ahmad said, “Pakistan’s nascent start-up ecosystem is inflecting with rising international investor interest on the back of talented founders. We at NICL are attempting to generate a manifold growth in entrepreneurially-minded, highly skilled human capital that accelerates this positive trajectory. Technological leapfrogging, be it through new venture creation or innovation of industry. The only way to attain the kind of growth needed to satiate the influx of our youthful population.”
500 Global is a leading venture capital firm with more than USD 1.8 billion in assets. A growing focus on technology, innovation, and unlocking capital in emerging markets. The company has invested in more than 2,500 start-ups worldwide with a portfolio that includes 33 companies valued at over USD 1 billion and 120 companies valued at more than USD 100 million.
NICL is a springboard for venture incubation and corporate innovation through an intersection of applied research, industry, and talent, to solve Pakistan’s biggest problems.
Post Views: 133
Tags500 Global appreciates Courtney Powell latest educational news in pakistan LUMS Ms. Powell National Incubation Centre Lahore ( new mobile Scheder-Bieschin William Makaneole